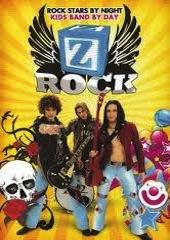 Welcome to the life of the Z Brothers (AKA ZO2), Paulie & David Zablidowsky and their buddy, Joey Cassata.  They rock out as ZO2 at night – but keep it mellow as the Z Brothers at kids’ parties to make ends meet in the IFC series “Z Rock”.

Both season of “Z Rock” are now available on FlixFling in our channel from STARZ.