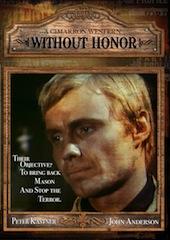 Arriving in Cimarron by train, demolitionist Pvt. Bill Mason deserts the Army in order to avoid being assigned to a military unit that is commanded by his father, Major Ben Covington. Discovering that the notorious Deeker gang has set up shop in the Outlet, Mason decides to offer out his services to the outlaw bunch. When Marshal Crown and Major Covington learn that a series of robberies in the area have involved the use of explosives, they immediately suspect that Mason is working for the Deeker gang. In a desperate attempt to save his son from getting into further trouble, Major Covington, out of uniform, seeks out the help of Marshal Crown. Their objective? To bring back Mason and stop the widespread terror of the Deeker bunch once and for all.