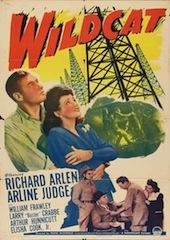 Wildcatter Johnny Maverick (Richard Arlen), and his pal, Chicopee Nevins (Elisha Cook, Jr.), are speeding toward Antril Bend, a small town in the oil region, that has offered $25,000 to the person bringing in the first oil well. They accidently find oil on the town’s outskirts, and Johnny writes a $4,000 hot check for the property. He covers that by having Chicopee sell his half interest to oil promoter Gus Sloane (John Dilson), for $7,000. Sloane hires a crew to start drilling on his half of the property, with Johnny’s old enemy, Mile Rawlins (Larry “Buster” Crabbe), as his foreman. Rawlins sabotages Johnny’s rig, causing Chicopee’s death. Confidence-man Oliver Westbrook (William Frawley), and his confederate, Nan Dearing (Arline Judge), hatch a plan to swindle Johnny by having Nan pose as Chicopee’s sister. It works, and Johnny makes Nan his partner. Another accident staged by Rawlins forces Johnny to sign a note to get money for repair. Nan falls in love with Johnny and abandons her plan to swindle him. As the note deadline approaches, Johnny learns that Sloane has purchased it as a means of taking over the well.