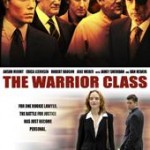 Alec Brno seems set to achieve the American dream. A poor kid from Queens, he’s graduated from a top law school and works for the best firm of trial lawyers in New York. Headed toward partnership and a prominent career, he falls in love with Annie Sullivan, a drug addict, who’s married to a gangster and is the principal witness in the most important case of Alec’s career. However clever a lawyer Alec may be, he can’t fix Annie’s problems, and the judicial system to which he’s dedicated his life proves impotent against the violent reality of the mob. Along the way to a dramatic conclusion, The Warrior Class shows us how the legal system actually works, and how battles are won and lost by our modern day swords for hire.