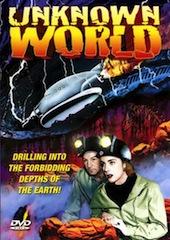 Dr. Jerimiah Morley becomes convinced that the world is headed to an inevitable worldwide nuclear war. He organizes an expedition made up of a team of expert scientists and an atomic-powered rock-boring vehicle called a “cyclotram” to find a subterranean environment where holocaust survivors could live indefinitely. When funding falls through, independently rich adventurer Wright Thompson underwrites the project under the condition that he be allowed to go. As the group goes deeper beneath the Earth’s crust, personalities clash, tempers flare, and the dangerous journey claims the lives of several expedition members. When they come upon an enormous underground expanse with its own ocean and phosphorescent light, it appears that their goal has been achieved.