24 Aug Triumph Of The Will 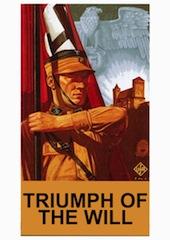 Click here to watch Triumph Of The Will now

Triumph of the Will was commissioned by Hitler in 1934 and directed by Leni Riefenstahl, and covers the events of the Sixth Nuremberg Party Congress. The original intention was to document the early days of the NSDAP, so future generations could look back and see how the Third Reich began. In reality, Triumph of the Will shows historians how the Nazi state drew in the masses through propaganda and also how Adolf Hitler had a unique and terrifying ability to entice crowds to his beliefs by the very power of his words.