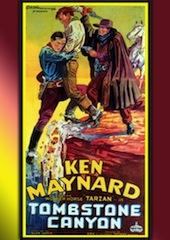 Traveling through Tombstone Canyon, Ken is aided by the mysterious Phantom, when a gang attacks him. He later finds the man that was going to tell him of his true identity, murdered. Alf Sykes was the murderer and when the Phantom kills one of his men, he blames Ken. Planning to hang Ken, Sykes lets him out of his cell, and then shoots the Sheriff. But Ken escapes, and with everyone after him, heads for Tombstone Canyon, where both his identity and the Phantom’s, will be revealed.