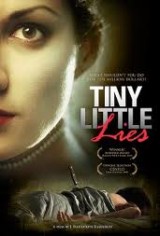 It’s a setup; A murdered wife, a jealous husband, a jilted lover and a frightened friend; all in the same apartment at the same time. Three of them set aside their bitter differences and better judgment in the hope of earning a $10 million payday. When washed-up artist Michael Taylor discovers his wife murdered in the upstairs bedroom of their swanky loft, the decision about what to do doesn’t come easy, because downstairs, an impromptu dinner party is under way for two wealthy patrons interested in purchasing Michael’s art. He convinces Martin, his dead wife’s dedicated assistant, and Dominick, his young, sexy artist protégé and his wife’s ex-lover, to keep quiet and close the deal. Despite their uncertainty about each other’s motives – and the paranoia over who the killer is – they form a fragile alliance to shut up, against a promise of a big pay off. They soon find out, however, that this is much easier said than done…