Posted at 16:15h in Movies, Reviews by Taryn
0 Likes
Share 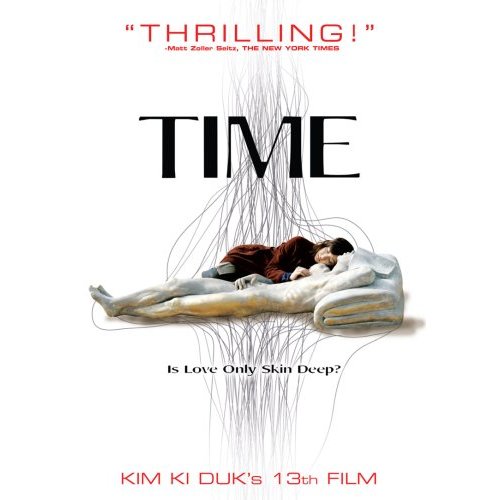 Time (originally Shi gan) is a 2006 film written and directed by Kim Ki-duk. The premise of the film – a woman surgically altering her entire face for the man she loves – is simple. However, the methods employed in bringing the characters and story to life are intricate and breathtaking.

Although the film did feature a lot of very graphic footage of cosmetic surgical procedures, the beauty of the environment added to the beauty of the raw emotion harnessed by actors Sung Hyan-ah and Ja Jung-woo, culminating in a cinematic work of multi-dimensional intellect. Sung Hyan-ah (as See-hee) is particularly dazzling in her wide range of talents, from running all over the place in high heels to bringing her character to incredibly realistic heights of mental illness.

The setting of the film is as much of an essential character as the actors. In particular, Jeju Loveland, a sculpture park in South Korea, contributes a unique and surreal element to the visual aspects of the film. The attention to detail in each scene, and how it is all intertwined with the story, makes an already interesting and intriguing film into an even more effective body of work capable of stimulating all levels of the human mind.

Time is a film that represents the wonderful potential of independent films, and how they are able to contribute to cinematic art in depths not possible in large, mainstream movie productions. Kim Ki-duk is easily a genius, and this film is another brilliant accomplishment that can be included among his growing collection of successful works.

Click here to watch Time now on FlixFling.  Rate the film and write your own review!