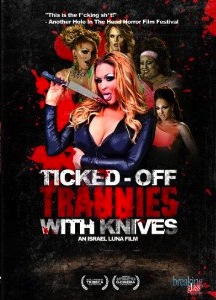 In the sprit of full disclosure, I didn’t go into this review empty handed—I had a case of beer. I also recruited my buddy John to join me. I would recommend any potential viewers of Israel Luna’s “Ticked-off Trannies with Knives” enter this movie watching experience similarly armed. This is not a film to watch alone and sober.

“Trannies” tells the story of Bubbles and her four friends—all transvestite performers, who get brutally attacked and left for dead after a romance gone wrong. What follows, as you can guess from the title, is a group of justifiably angry transvestites enacting revenge upon their tormentors. With knives.

The plot doesn’t get any deeper than that. Hell, it barely gets that deep, nor would you want it to. While the acting is for the most part fine, the dialog is constant, frivolous rambling. Characters chatter on as if any second of film that doesn’t have constant noise is a second wasted.

The film also suffers from what I call, “Mona Lisa Syndrome”. Essentially, every shot in this movie is from the mid-stomach up.  It doesn’t matter if they are walking, lying on the group, fighting, etc, expect the same portrait view of the characters. It makes the visuals boring. The grainy, Grindhouse-style visuals are wasted because the camerawork is that of a highschooler.

Ultimately, even though this movie is tongue-in-cheek, “Trannies” falls down because it doesn’t take itself seriously.  Films like Death Proof, Planet Terror, and Black Dynamite work because behind all the camp and schlock are incredibly well planned, and made, movies. They can be ridiculous and tongue in cheek because they are so fundamentally sound. Alternatively, the movies that films like these pay homage to, the original exploitation films, are funny and remembered because they were played without irony. We find the humor in these films because despite the ridiculousness onscreen, we imagine the people making the film treating their films as if it were a legitimate blockbuster.

Unfortunately, “Trannies” doesn’t fall into either category. It’s not well made and it doesn’t take itself seriously. What are we left with, then? A movie with a provocative title that fails to provoke.

Click here to Judge Ticked-off Trannies with Knives for yourself on FlixFling.

Ticked Off Trannies With Knives