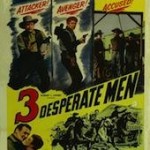 When they learn that their brother Matt Denton (Ross Latimer) is awaiting trial in California, charged with train robbery, deputies Tom Denton (Preston Foster) and Fred Denton (Jim Davis) leave their home in Texas and head west. They arrive in Tulare just in time to rescue Matt from being hanged, but a guard is killed during their escape. Ed Larkin (Rory Mallinson) falsely accuses them of a long list of crimes. They return to Fort Grant so that Tom can see his sweetheart Laura Brook (Virginia Grey). They encounter outlaw Bill Devlin (William Haade) who persuades them to hold up a train which Laura unwittingly told them would carry a large payroll. Soon the whole territory is enraged at their deeds. They return to Fort Grant to hold up the two banks that are filled with huge sums of cattle money.