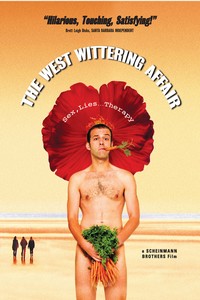 A fateful weekend in the country dramatically changes the lives of four friends, and this film cleverly weaves the complicated tale leading up to the weekend, the confusing consequences, and finally the unraveling of the lingering dark secrets. The story line is intelligent, funny, and at times shocking, but always entertaining. The scene compositions are all clearly well thought out, enhancing the story and events, and adding a deeper level of overall sophistication to the film.

As writers and actors, David Scheinmann and Sarah Sutcliffe are both successes in their individual contributions, and Scheinmann also shines brightly as the director. Rebecca Cardinale and David Annen are sincere in their commitments to the characters they play; both actors present strange, multidimensional, and beautiful performances.

Overall, The West Wittering Affair is an extremely well-done work of writing, directing, and acting that will resonate with today’s 30-somethings finding themselves stuck amid biological clocks, questionable relationships, and crises of self-identity.