28 Oct The Symmetry of Love – Review 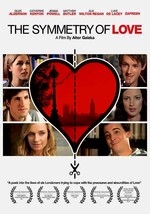 The Symmetry of Love (2010, written and directed by Aitor Gaizka, and starring Giles Alderson, Catherine Kenyon, Jemma Powell, Matthew Butler, Alix Wilton Regan and Luke de Lacey) is a sweetly complicated montage of love stories. Very much in the tradition of Love Actually (2003, Universal), Symmetry intertwines the lives of six British singles looking for someone special to settle down with.

The ensemble of characters is adorable, particularly the sincere and slightly awkward Richard (Matthew Butler). Each character has a unique and well-defined personality that remains consistent throughout the story. There is also an air of intellect in each of the characters, manifesting in some as sharp and sensitive, and in others as crafty and flirty. It all adds up to a variety-pack of subtle comedy that is capable of entertaining a diverse audience.

While this film is at all times captivating, it continuously falls short of genius. Written and directed by the same person, the movie is an example of how difficult it is for one mind to create and shift a story and its characters from the page to the screen. A different director may have been able to sharpen and hone the film into a more sophisticated work – the potential for a clever, witty, and dazzling movie is certainly there, but is never quite realized.

Light-hearted and entertaining, The Symmetry of Love definitely reaches a level of quality and talent that will easily keep the attention of a young and intelligent audience, but will not quite achieve the acclaim of critics.

Watch The Symmetry of Love NOW on FlixFling! Tell us what you think by rating and reviewing this film for yourself!