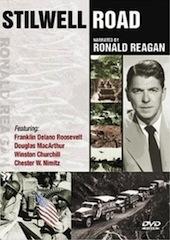 Documentary about the construction of the Stilwell Road–originally called The Ledo Road–a 478-mile passage from Assam, India, to Ledo, Burma, during World War II. The road, which was built by 63,000 workers and cost $150 million, was used by the British, Chinese and Indian armies to transport supplies, troops and other essentials from India to Burma in order to keep the Japanese from overrunning the entire theater. Included is footage of the construction of the road itself and of Gen. Joseph “Vinegar Joe” Stillwell, the American general in charge of forces in the China-Burma-India area of operations and for whom the road was named.