Posted at 13:56h in Movies by FlixFling
0 Likes
Share 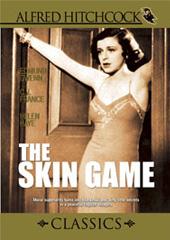 Based on a successful play by John Galsworthy, and adapted by Hitchcock and his wife Alma Reville, this dramatic study of the British class system stars Edmund Gwenn as Mr. Hornblower, a Scotsman who is at odds with an aristocratic English landowner, Squire John Hillcrest. After selling a neighboring piece of property to Hornblower, the Hillcrest family believes they’ve become the victims of a ‘skin game’, or swindle, when the man builds a factory on the land instead of preserving it as he had promised. Hornblower and Hillcrest are soon embroiled in a fierce rivalry to buy the parcel of earth that separates their estates. Vowing to uphold her family’s rights to the land, Hillcrest’s wife Amy attempts to impede Hornblower by blackmailing his daughter-in-law Chloe when a dark secret from her past is uncovered.