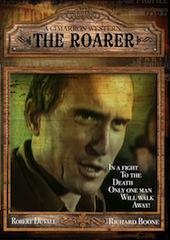 Sergeant Bill Disher, a 20 year cavalry veteran, is driven to the brink of rage when close friend Little Tom is killed in an accident. While grieving over the death of his military comrade, Disher bitterly blames the modernization and expansion of the West as being the cause of Little Tom’s fate. While in a drunken rage, Disher burns down Cimarron’s funeral parlor. He then later accidentaly kills one of Cimarron’s prominant citizens. Knowing that the local townspeople want vigilante justice at the end of a rope, Disher escapes from jail. This forces the hand of Marshal Crown to hunt Disher down and fight him to the death.