10 Aug The Pied Piper Of Hamelin 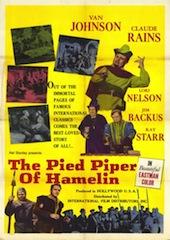 Click here to watch The Pied Piper Of Hamelin now

The singing, rhyming citizens of Hamelin hope to win a competition with rival towns for royal recognition. To this end, the mayor outlaws play (which is a bit hard on the children) and refuses to help a rival town when it’s flooded. But rats (seen only as shadows), fleeing the flood, invade Hamelin in droves; a magical piper, whose music only children (and rats) can hear, strikes a bargain…which, once the rats are gone, the Mayor and council renege on, to their subsequent regret.