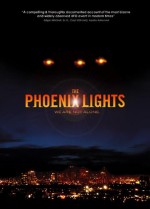 During the Evening of March 13, 1997, thousands of Arizona residents witnessed a silent mile long V-shaped formatting of lights slowly gliding overhead. The unexplained sightings garnered headline news, catching the attention of USA Today, Extra, CNN, MSNBC, national morning TV shows and evening news shows including: Tom Brokaw, Peter Jennings and Dan Rather. One person, however; was not at all surprised by this, but simply grateful that the phenomenon she’d been witnessing and documenting for months was being validated. Dr. Lynne Kitei’s first-hand experience, as well as her startling photographs, are considered by optical physicists and experts in the fields as groundbreaking and historic. After seven years of meticulous research, she is coming forward with stunning data, personal interviews and in depth examination of the strange lights seen over Phoenix and witnessed by thousands on March 13th 1997. Includes testimonials from ordinary people, professionals, military people, police, a 911 dispatcher, a Phoenix council woman and the former governor of the State of Arizona!