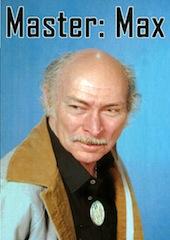 In the opening episode of this series, John Peter McAllister is introduced as an American who remained in Japan after the War and became a Ninja. He has just discovered he has a daughter after many years and decides to go to America to find her. On his way out he is wounded by a former protégé who vows to track him down to stop him from breaking the Ninja code. Meanwhile, in America, in the town of Ellerston, a drifter and wannabe hero Max Keller runs into a girl who flags him down on the road. Apparently, the girl was being attacked by a corrupt Sheriff. Max saves her and learns that the girl, Holly Trumbull, and her father own an airport which is trying to be closed and bought out by a scheming land developer. The Master meanwhile arrives and runs in to trouble with the sheriff at the bar. The Master demonstrates his amazing skill to Max during a fight in the bar with the Sheriff and other hoodlums. Max decides he wants to become a ninja. Arson to the Trumbull’s Airport causes even more problems for the heroes as they team up to stop the evil land developer and his cohorts. Max tags along with the Master in hopes of becoming a Ninja and also to help him find his daughter.