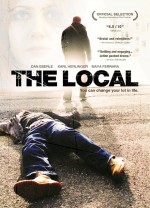 The Local tells the story of a man drifting along the dark edge of society. Tortured by addiction and a trouble past, the local has just been released from jail, and returns to the only world he knows; that of crime. He becomes a messenger for Brooklyn’s top drug gang, a job that carries quick rewards as well as the risk of death. When a mysterious stranger approaches the local, and offers him a deal.. he may have found a glimmer of hope where he least expected. The stranger asks him to capture from his gang boss, a girl addicted to drugs, and bring her safely out. The stranger turns out to be a detective, and the girl is his estranged daughter. Along with the deal comes money, but the local must also talk, and of course, he must deliver the girl alive. When he meets this girl, the local realizes saving her will afford him a way out of his life of crime, a path towards a personal redemption. A superbly conceived existenial neo-noir-suspense-thriller, written and directed by award-winning filmmaker Dan Eberle (Jail City), The Local stylishly depicts an underworld of crime, where it is hard to find anything good amongst all that is bad, where a sinner can still redeem himself from a world broken beyond saving.