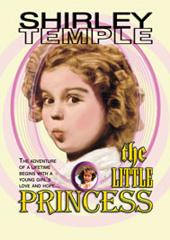 Based on Frances Hodson Burnett’s popular children’s book and stage play, this lavish Victorian drama features Shirley Temple in her first Technicolor film. The irresistibly charming Temple stars as Sara Crewe, a wealthy young girl who is enrolled at a prestigious boarding school while her father, Captain Reginald Crewe, is away in Africa fighting in the Boer War. After Sara receives news of her father’s sudden death, the cruel and envious headmistress of the school, Amanda Minchin, proceeds to make life miserable for the now penniless girl. Sara is forced to work in servitude in the school’s kitchen, but deep in her heart she knows that her father is still alive. She soon escapes from Mrs. Minchin’s clutches and begins the seemingly impossible search for the missing Captain Crewe.