10 Aug The Light Of The Western Stars 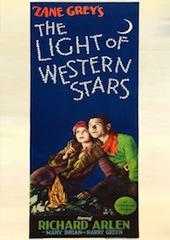 Click here to watch The Light Of The Western Stars now

A friend of Dick Bailey is killed by a mysterious assailant, whom Dick suspects to be Stack, who is in league with the crooked sheriff. Out on a spree, Dick swears he will marry the first woman he sees, who happens to be Ruth Hammond, sister of his dead friend, arriving to take charge of the Hammond ranch. Revolted by his rough proposal, she fires him as the Hammond foreman, and she proceeds to the ranch. Stack, informs her he has purchased the ranch for the payment of the back-due taxes, and she relents and rehires Dick and his friends, to aid her in her fight against Stack.