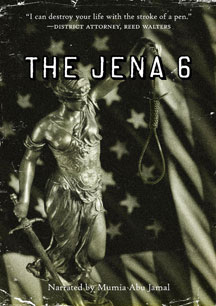 Filmed, directed, and produced by Kourass Esmaeli, Richard Rowley, and Jacqueline Soohen, The Jena 6 is a documentary of the circumstances centered in the city of Jena, Louisiana – and in the 21st century – that reminded everyone in America that racism continues to live and breathe comfortably in many areas of this great nation.

Mumia Abu Jamal narrates this concise account of the six boys accused in the case, and of their friends and families. After an awkward introductory segment, this film is generally a montage of individuals speaking their own words. What their words reflect is a situation in which the young black population of a small, southern town had the gall to act as though all of the stories of equal rights preached to them in their classrooms their entire lives was not a bunch of bullshit.

In turn, the young black people were given the opportunity to see just how much work is yet to be done in the interest of Martin Luther King, Jr.’s “I had a Dream” speech. In closing, the film captures the father of one of the victims saying that, as soon as his son is out of jail, he will tell him that this is what it means to be black.

The Jena 6 dusts off the fifty-year-old images of children being pummeled with fire hoses at the hands of the police men they are instructed to trust and respect. It reminds us that just because those images are in black and white, institutionalized racism is not an outdated relic of the past.

Click here to watch The Jena 6 on FlixFling.  Write you own review of the documentary to tell us what you think.