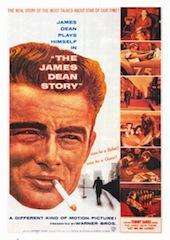 This documentary, which was undertaken soon after James Dean’s death, looks at Dean’s life through the use of still photographs with narration, and interviews with many of the people involved in his short life. Interviewees include the aunt and uncle who raised him after his mother’s death (when James was 9), his fraternal grandparents, a cabdriver friend in New York City, and the owner of his favorite restaurant in Los Angeles. James’s father, who was alive when the film was made, does not get a single mention.