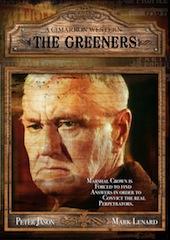 aka: Cimarron Strip. While traveling through the Cimarron Territory, the homesteading Arlyn family witness two men being “rope-dragged” by four horsemen. Later, the two men are found dead hanging from a tree. When asked about the incident, Jared Arlyn admits to seeing the men being dragged, but out of fear and not wanting to get involved, he refuses to testify against the guilty party. Crown is forced to find further answers in order to convict the real perpetrators.