Posted at 12:36h in Movies by FlixFling
0 Likes
Share 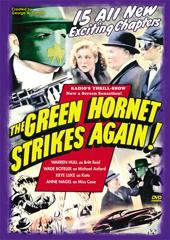 Britt Reid, continuing his Grimbolt plant investigation, learns that a Dr. Beloe worked with Weaver on the anti-aircraft bomb responsible for so many accidents. As The Green Hornet, Reid calls on Dr. Bedloe, encounters and outwits the racketeers and, intercepting a telephone call, learns a test is being made of the bomb. Racing to the testing ground, The Hornet sees a plane taking off and, unaware it is to be a target for the bomb, boards a parked plane and speeds off in pursuit of the target. Is the Green Hornet flying to his death? Will the bomb strike him down?