31 Jul The Four Horsemen Of The Apocalypse 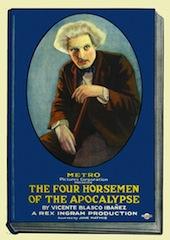 Click here to watch The Four Horsemen Of The Apocalypse now

Madariaga is an Argentinian cattle baron with two daughters: one married a Frenchman, the other a German. Madariaga favors his French grandson, Julio, as his heir, but Julio is a wastrel and rake whose greatest achievement is tangoing well. When Madariaga dies, his fortune is split between his daughters. The German side of the family goes back to Berlin, while the French half moves to Paris, where Julio becomes a painter and falls in love with Marguerite, a married woman. When WWI explodes (and is described by the mystic Tchernoff as the coming Apocalypse), and Marguerite’s husband is blinded, Julio decides he must join the army, and becomes a reformed character. But Death hasn’t finished gathering his harvest yet and Julio must face his own cousin on the battlefield.