15 May The Flying Serpent

Posted at 18:41h in Movies by FlixFling
0 Likes
Share 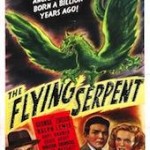 The demented archaeologist Dr. Andrew Forbes (George Zucco) discovers a living, breathing serpent creature known to the Aztecs as Quetzalcoatl (the Killer Bird God) and accidentally kills his wife by giving her one of the beast’s feathers, causing the creature to track her down and slaughter her. Now Dr. Forbes uses this twisted knowledge to extract revenge upon his enemies by placing one of the serpent’s feathers on his intended victim and letting the beast loose to wreak havoc.