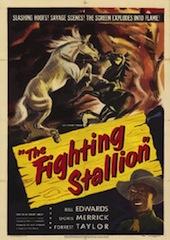 Released from a navy hospital following WW II, Lon Evans learns that he faces eventual blindness and returns to his Wyoming ranch. He sees a beautiful white stallion named Starlight and his cowhands Lem and Yancy say he is a killer and cannot be trained. Lon disproves this by training the stallion to act as his guide in preparation for his future blindness. He meets Jeanne Barton, who is staying at a nearby dude ranch and they fall in love, but Lon, knowing that he is going blind, decides he cannot marry Jeanne, and avoids her. A wild black stallion that also roams on Lon’s ranch jumps in the corral and kills Lon’s pinto stallion.