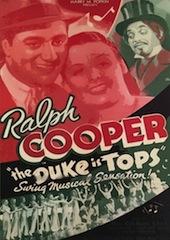 Click here to watch The Duke Is Tops now

Duke Davis has invested all his savings to back his sweetheart, Ethel, in a road show over the old T.O.B.A. circuit, on which they have both been performers since childhood. Marshall, a New York talent scout, makes an offer to Ethel as a single and, to induce her to take it, Duke writes a fake check, made out to him, for $5000 pretending he has sold his contract with Ethel to Marshall. Resentful and heartbroken, she accepts and becomes a big hit in New York. Marshall then books her at the swanky Century Club, plans her show himself, and it flops miserably. Meanwhile, Duke has used his last resources to start a new show, but without Ethel it also fails. He joins the Doc Dorando medicine show, and with him as the speiler for the quack elixir sold by Dorando, it is successful. He becomes Doc’s partner with an elaborate trailer and a company of entertainers, including Willie Covans, the Basin Street Boys, The Cats and the Fiddle, “Rubberneck” Holmes and Joe Stevenson. Money is rolling in but he drops everything to hurry to Ethel’s side when he hears of her misfortune. Ella, Ethel’s faithful companion and maid, has also told Ethel of Duke’s sacrifice in order to give her a chance in New York. Duke talks the Century Club owner, Fenton, into allowing him to build an elaborate show based on a medicine show concept, and sends for Doc Dorando and the other entertainers.