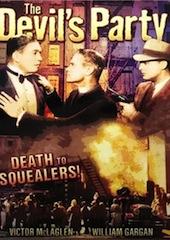 Four boys and a girl form a gang in the Hell’s Kitchen section of New York City, and in the course of committing a crime they start a fire, leading to one of them being caught and sent to the reformatory. Years later, the five of them make a practice of meeting once a year. Marty, the one who had been caught, now runs a night club and gambling house, while Helen is a singer who performs there. Jerry is now a priest, while the two O’Mara brothers have become policemen. On the night of their reunion, the O’Mara brothers are called to investigate the death of one of Marty’s customers. Marty knows that two of his enforcers are responsible, so he sends them back to cover up the evidence. But one of the O’Mara brothers confronts them, with violent results that will set the former friends against one another.