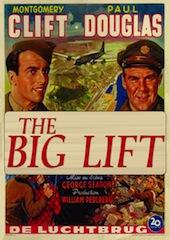 In 1948, the Soviet Union blockades the Allied sectors of Berlin to bring the entire city under their control. A semi-documentary about the resulting Berlin Airlift gives way to stories of two fictitious U.S. Air Force participants: Sgt. Hank Kowalski, whose hatred of Germans proves resistant to change, and Sgt. Danny McCullough, whose pursuit of an attractive German war widow gives him a crash course in the seamy side of occupied Berlin.