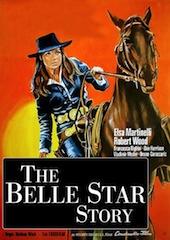 Abused and dominated by men in her youth, Belle Starr now out-rides, out-smokes, out-shoots, and out-gambles them as she makes her way around the Old West, usually wearing male garb. One man who’s her equal is Larry Blackie with whom she has an on-again, off-again relationship which is often argumentative and sometimes violent. Together they become involved in a robbery which goes awry. Belle has to rescue Larry and though he’s grateful, he now wants to go his own way. However, he expresses the hope that someday they’ll once more cross paths and then… who knows?