14 Dec The Battle Of Russia 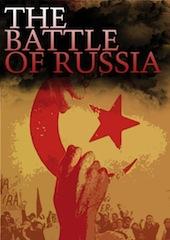 Click here to watch The Battle Of Russia now

In this installment of the “Why We Fight” propaganda series, we learn about the events on the Russian front of World War II. We learn about Russia’s heroic resistance to invasion in the past and how those qualities were called upon in the current war. We also learn about Russian tenacity and their determination to win against the seemingly invincible forces of Nazi Germany in the bloodiest fighting of the war.