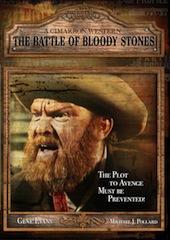 When Wilcat Gallagher’s Wild West Show hits Cimarron, trouble starts when the shows main attraction features the reenactment of a cavalry slaughter of Indians called, The Battle Of Bloody Stones. When Indians in the Cimarron territory become angry with the way that the battle is portrayed, conflict erupts between the Indians and Wildcat Gallagher’s band. Upon the provoked death of John Wolf, father and Indian Chief Ghost Wolf pledges war against the town of Cimarron. Marshal Crown is ultimately faced with the job of stopping Ghost Wolf and preventing another potential massacre.