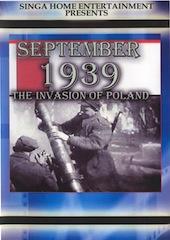 Click here to watch September 1939: The Invasion Of Poland now

This documentary depicts real footage and pictures of the German invasion of Poland in 1939, and is narrated by Frank Willis, an expert war journalist. This film also has rare footage of Hitler and shows just how much power he had over the helpless.