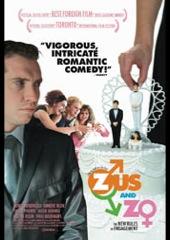 Zus & Zo, produced by Filmprodukties de Luwte, is a 2001 romantic comedy set in the Netherlands and Portugal. It was written and directed by Paula van der Oest, and stars Sylvia Poorta, Anneke Blok, and Monic Hendrickx as three sisters bent on foiling their gay brother’s straight marriage. It is primarily in Dutch, but also features English, French, and Portuguese, and has English subtitles.

The three sisters, as very vibrant and strong characters, are introduced in a familial melee of intercut scenes. The family dynamic is extremely complicated; one sister’s husband is in love with another sister, whose own husband is having an affair with the third sister. A clause in their dead father’s will brings a fourth vibrant and beautiful woman into the mix as their gay brother’s fiancé.

The sisters initially come across as very separate and self-absorbed women, yet are forced to come together in order to maintain their claim in the family’s resort hotel. They combine their tremendous energy into a freight train aimed at the break-up of their brother and his fiancé. As formidable as they are, though, they find the relationship between the soon-to-be newlyweds in much more solid – and convenient – ground than originally anticipated.

The sisters and their motives are initially very shallow, but as the film unwinds, a deeper, fuller love makes its way to the surface. The bond among the four siblings is slowly exposed here and there, in between the cracks of controversy. Ultimately, the love that exists in their family allows them – unwillingly and uncomfortably – to set aside drama, pain, and misery, bringing a happy conclusion to this very sweet story.