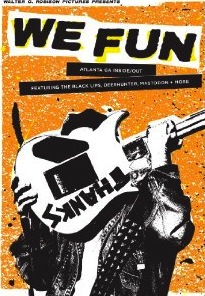 We Fun: Atlanta, GA Inside Out is a 2009 documentary directed by Matthew Robison about the emerging punk music scene in Atlanta, Georgia. In a state dominated by Athens-bred superstars (REM, B-52s, etc.), this film lets the big city assert its place in the industry. As one musician states, Atlanta is “like Athens without the bullshit.”

Atlanta is growing rapidly as the place to be in the film industry, and has been a long-established base for hip-hop. The music in We Fun, though, is in an entirely different realm. Described as “garage punk,” bands like Black Lips, King Khan & the Shriners, Deerhunter, Lids, and Subsonic are nurtured in kitchens, back yards, bars, and small theaters.

This film gives a visual overview of the foundations of this particular music scene. Those foundations are: mustaches and beer. Any band (or individual) with a mustache, beer, talent, and the drive to keep putting themselves out there – and, specifically, tour outside of Atlanta – has a chance at stardom.

Stardom comes very slowly in the south, though, and can be quite a brutal and ceaseless process. We Fun gives some insight on how important it is to have a very well-established line drawn between success and partying.

This film is young and fun, but would be much more impressive if most of the people appearing in it were not drunk.

Click here to watch We Fun: Atlanta, GA Inside Out on FlixFling or Read more about this documentary.  Rate and review it for yourself!