Posted at 11:33h in Movies, Reviews by FlixFling
0 Likes
Share 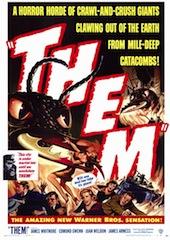 Them! (and yes, it needs to always have an exclamation point when it’s being referenced) is a classic black and white B-movie about giant killer ants. When the giant, very fake-looking ants are onscreen the movie is entertaining. When they’re off-screen, it’s quite dull. We’ve seen movies about giant spiders but ants? Are they really that scary? I was a crazy nature child and would pick up ants all the time. Believe me, when their pincers bite down on you it hurts like hell. A lot of people aren’t aware that they also cause a lot of human deaths in parts of the world. To imagine GIANT pincers biting down on me is quite horrifying. I expected there to be a whole lot of action in Them!, but instead there’s more talking.

It starts off with a police sergeant (James Whitmore) and his partner (Chris Drake) finding a shocked little girl walking around in the middle of the New Mexico desert. They go to where she came from and find her trailer home completely destroyed. They then go to a general store and find its owner dead inside. Ok. So this must just be the work of a serial killer, right? What’s odd is that the owner was found dead with large amounts of formic acid on him. Even stranger is that a large mysterious footprint was discovered near the trailer home of the girl. Soon the FBI and a father-daughter team of entomologists (the excellent Edmund Gwenn, and Joan Weldon) get involved. In an iconic scene Gwenn’s character tries to “de-shock” the girl by placing a sample of the acid in front of her. She freaks out and starts screaming “Them! Them! Them!” (hence the title of the movie). Soon they discover that a giant colony of ants are roaming around in the desert and have grown in huge size because atomic bombs were tested in the area. The queen’s nest is discovered in the drainage system of the desert and if the government doesn’t eradicate them then the ants will eradicate all human life!

Them! has a great setup and the scene when we first see the ants is very well-done. Joan Weldon’s character is standing in front of a sand dune in the windy desert when all of a sudden a giant ant creeps up behind her. The great thing is that there’s no music during the moment because if there had been then it would have made it less frightening. On a technical level the ants are very well done for 1954 and the sounds they make when they communicate to one another via antennae scream cheesy sci-fi B-movie terror. During production the sound crew actually recorded U.S. tree frogs and mixed them all together. Yet there just doesn’t seem to be much action here. I kept expecting all hell to break loose and the ants to invade a nearby town or city and cause as much mayhem as possible. Instead all we really see are the government, FBI, army, and entomologists talking about what to do. Enough with what to do! Just let them wreak havoc because it’s more enjoyable to watch!

The final line in the movie is admittedly excellent because it says so much about the context of the 50s period. The U.S. had just experimented with atomic bombs and had succeeded in annihilating Hiroshima and Nagasaki. Them! questions the atomic age and suggests that there might be even bigger risks out there than total destruction. This is an achievement in science, yes, but it’s a life-threatening achievement! I doubt that ants or other insects can become physically huge as a result of atomic radiation but it’s so much fun to watch a zeitgeist movie of its time make fun of this. Sadly, I don’t think it’s worth it to take time out of your day with Them! It’s clever but not as exciting as I thought it was gonna be.