Posted at 13:17h in Movies, Reviews by FlixFling
0 Likes
Share 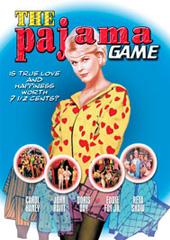 The Pajama Game takes us into the whimsical and musical world of PJ manufacturing at the Sleeptite Pajama Factory. The film, starring Doris Day and John Raitt, starts as many Doris Day films do — as a battle of the sexes, in this case, between the steadfast leader of the factory’s grievance committee ‘Babe’ Williams (Day) and the new superintendent Sid Sorokin (Raitt).  However, The Pajama Game quickly grows into a movie that is overwhelmingly about 7 ½ cents.

Originally based on the book 7 ½ Cents and adapted for the stage before being made for the screen, The Pajama Game pits the overworked factory employees against the management in favor of 7 ½ cents being added to their hourly wage.  In the midst of the labor struggle, and surrounded by a quirky and endearing cast of background characters, Babe and Sid try to make their budding romance work while remaining on opposite sides of the fight.

The romance between Babe and Sid is sweet, but fairly run-of-the-mill, especially for Doris Day movies. What makes this film stand out is the emphasis on labor issues, feminism, and frequent and vibrant musical numbers choreographed by the great Bob Fosse, my favorite being “There Once was a Man.” Above all, The Pajama Game is a fun, well-made film about sticking to your principles no matter what, which makes it a must-see in my book.