06 Jul Review – The Man Who Knew Too Much

Posted at 13:33h in Movies, Reviews by FlixFling
0 Likes
Share 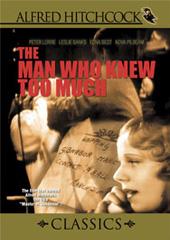 FlixFling contributor, Alexandra Gibson reviews The Man Who Knew Too Much

In 1934, Alfred Hitchcock made The Man Who Knew Too Much.  In 1956, he remade it, though I have no idea why, as the original is thoroughly captivating.  The film begins at Winter Olympic-type games where an unsuspecting couple is forced into the middle of an assassination plot.  After their friend is suddenly murdered, the Lawrences try to find their kidnapped daughter, which leads them down a road as twisted as it is dangerous.

This version of The Man Who Knew Too Much differs from later, more famous Hitchcock films because it lacks the token stylization of classics like Vertigo or North by Northwest. However, this works largely in the film’s favor as it invokes many aspects of the noir genre to reflect its shady plot.  This film also depicts more amusing and relatable characters than are found in Hitchcock’s later work.

The most recognizable actor in the film is Peter Lorre, though every actor fits his or her role very well.  As the quickly unmasked villain, Lorre is eerie, cool and personable.  He gives a great performance and heightens the tension throughout the film as he plans murders as calmly as he offers people cigarettes.

The Man Who Knew Too Much will never be called Hitchcock’s crowning achievement, but it is exciting, funny, and, strangely enough, heartwarming, perfect for a relaxing night in or rainy afternoon.