Posted at 11:36h in Movies, Reviews by FlixFling
0 Likes
Share 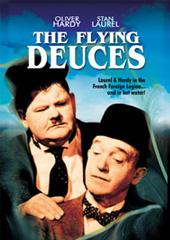 After watching The Flying Deuces, I have dedeuced (heh, get it?) that Laurel and Hardy are similar to The Three Stooges; they are like anchovies – you either like them a lot or you don’t at all.  I, apparently, am not going to order an anchovy pizza anytime soon.  Nonetheless, I can certainly understand why so many people love Laurel and Hardy.

Their film The Flying Deuces takes Laurel and Hardy to Paris on vacation, where Ollie Hardy falls hopelessly in love with an innkeeper’s daughter. When his proposal of marriage is refused, he falls into a deep depression and attempts to commit suicide (and talks Laurel into doing the same), but eventually joins the French Foreign Legion to mend his broken heart.  Of course, the pair gets more things wrong than they get right, but they truly mess with flair.  After a time in the foreign legion, a stint in jail for desertion, and a song-and-dance number, the two mistakenly hijack a plane.

The pairing of dim-witted Laurel and snarky Hardy is wholesome.  They perform their slapstick comedy perfectly and highlight the movie with impromptu dance performances and harp concerts.  If you are a fan of classic slapstick comedy, the likes of which are not made anymore, you’ll love The Flying Deuces.