Posted at 10:35h in Movies, Reviews by FlixFling
0 Likes
Share 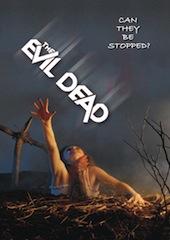 The Evil Dead (1981) is on crack. There’s a scene in this movie where a young woman is raped by trees that come alive. Trees?! TREES?! This is a horror movie that was banned in many countries when it came out in 1981 and even received an NC-17 rating when it was rereleased in 1994. It’s pretty violent and gory; some of the violence is fake and clay-mated (I’m not joking) while some of it is pretty freakin’ gross. To this day I still think it’s the silliest, most ridiculous gorefest I’ve ever experienced in my life. Silly, yes, but oh so much fun (that is, if you’re as big a horror buff as I am). It certainly doesn’t have much of a story. A group of college friends, led by Ashley (Bruce Campbell), the real hero of the movie, drive out into the middle of the Tennessee hills to spend their spring break at a remote cabin. Of course the cabin has death written all over it so they decide to be stupid and stay there regardless. They find a Sumerian version of The Book of the Dead and listen to a tape recording of a professor reading off from it. This then unleashes evil demons that trap the friends in the house and start to possess them one by one. The only way to kill a demon is to totally dismember them…

The movie has become known as one of the best cult classics of all time. In Canada, it even got made into a stage musical! The weird thing is that it’s written and directed by Sam Raimi, the guy who nowadays is most famous for directing the Spider-Man series with Tobey Maguire. Not too many people know that Raimi is actually a huge horror buff and has produced numerous horror movies like The Grudge (2004), 30 Days of Night (2007), and the upcoming exorcism movie The Possession (2012). Raimi spawned two sequels, Evil Dead II (1987) and Army of Darkness (1992), the third of which is much less of a horror movie and more of a comedy. It’s already getting remade and will debut in theaters in April of next year. Raimi is apparently co-writing the screenplay with Oscar-winning screenwriter Diablo Cody, who took home the statue for Juno (2007) and also wrote Jennifer’s Body (2009) and Young Adult (2011). It will only be a good remake if it combines gore and laughs in a steady way and doesn’t overload on CGI. Please don’t disappoint us, Sam and Diablo and everybody else who’ll be a part of it!

The only reason to love this movie is for its cheesiness. The movie takes all the horror genre conventions and has so much fun playing with them. The creepy woods. The creepy cabin in the woods. The dark, scary basement. Crazy people possessed by demons that are trying to imitate Linda Blair from The Exorcist but can’t ever sound as cool as she does. Campbell is badass in the lead role and becomes a thousand times more badass in the following sequels. The demons are outrageous to look at and though they don’t scare me I think they can easily scare anybody who can’t handle scary movies. Much of The Evil Dead entertains me more than scares me, but the way Raimi uses the camera to swoop over the woods with creepy background noises has always gotten under my skin.

This certainly tries to be scarier than its two sequels (in Army of Darkness Ashley goes back in time to 1300 AD where he has to battle more demons there), which I like because it’s always funny to watch a serious movie come off as outrageous. See this by all means. Just be warned that the violence is relentless and extremely gory.