Posted at 12:46h in Movies, Reviews by FlixFling
0 Likes
Share 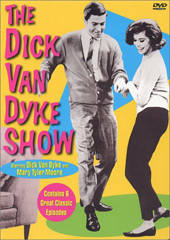 As I watched The Dick Van Dyke Show, I could not help but think of AMC’s Mad Men.   Rob Petrie and Don Draper, both dapper men in the media business, are products of the urban work life/suburban home life split of the 1960s.  Both have pristine wives and adorable children at home.  Perhaps Mad Men depicts what that lifestyle was really like, while The Dick Van Dyke Show depicts what people at the time wanted us to think it was like, though I shutter to think of Dick Van Dyke in the same sordid situations as Don Draper.  Regardless, I’ll watch either show anytime – for different reasons, of course.

The Dick Van Dyke Show is funny.  The role of Rob Petrie, with its combination of witty dialogue and slapstick comedy, fits Van Dyke like a glove.  As always, he is humorous and utterly lovable. His costars fall equally well into their endearing alter egos – Mary Tyler Moore as impeccable Laura, Rose Marie as perpetually dating Sally, and Morey Amsterdam as wisecracking Buddy.  Together, they make a very entertaining cast.

Like many sitcoms, from their inception through today, The Dick Van Dyke show is fairly simple.  Its characters and plots are easily understood and laughed at.  But what is wrong with that?  Sometimes it’s nice to slow down for some heartwarming entertainment, and there is no better family to do that with than Dick Van Dyke’s.