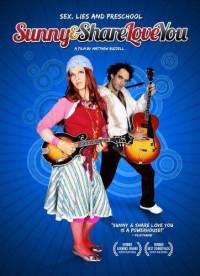 This film, released in 2007, directed by Matthew Buzzell, and written by and starring Michele Mulroney and Micah Schraft, is amazing.

“Colorful” does not even come close to describing the characters, images, and sounds captured in Sunny & Share Love You. This is not a horror flick, but Mulroney and Schraft somehow – as writers AND actors – concoct and utilize a mix of humor, horror, disappointment, and shock consistently throughout the entire film. In the film’s synopsis, the characters seem flat and degenerate, but on screen, they are fabulously multi-dimensional…and degenerate.

The mysteries and cyclical nature of child abuse, addiction, and mental illness are all fiercely revealed by the tremendously dysfunctional parents (played by Mulroney and Schraft), yet they maintain a level of vulnerability and human-ness that is difficult to dismiss. Watching the film is like repeatedly jumping from an ice storm into a boiling hot tub, and then back out into the ice storm again, all while completely naked.

Only the emotionally bereft will fail to be moved – in some way – by this film. Disgust, joy, shame, empathy, and pain are all emotions this movie has the power to elicit, but regardless of which (or all) of them it is, Sunny & Share Love You is likely to remain at the front of the viewer’s conscious awareness for days.