Posted at 10:00h in Movies, Reviews by FlixFling
0 Likes
Share 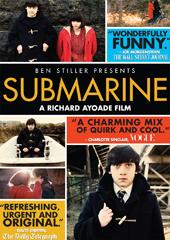 Submarine is the directorial debut of Richard Ayoade, who the geekier of readers will remember from “The IT Crowd” and “Darkplace.”   It is an autobiographical coming-of-age set in Wales, and follows Oliver Tate as he learns about love and loss.

Oliver Tate is, as are many of his indie-protagonist peers, an overly articulate, utterly unique young man in a community so backwards, its members have ostracized him and labeled him unpopular.  Like any other child of his age, he is looking for a way to fit in and resorts to bullying an oft-bullied classmate to win the affections of this first love, Jordana.  Jordana is an emotionally closed off pyromaniac who reminds me much too much of myself.  Indeed, much of this film triggers flashbacks to my childhood, teen years, and last week.  It will do the same for many film students, makers, and enthusiasts, as Oliver imagines what the scripting, camera angles, and editing would be if key points of his life were immortalized on screen.

This, I think, is the best part of the film.  The artistic choices and quip-filled script are excellent and truly memorable.  However, Oliver’s imagination and yearning for something beyond reality helps us connect to the character because it reminds us that we were like that once too.  Hopefully, we still are a little bit.

Submarine is the epitome of quirky indie.  It gets a bit tedious at some points, but the excellent moments, of which there are many, make up for that.  It is real and honest and you should watch it.