Posted at 10:43h in Movies, Reviews by FlixFling
0 Likes
Share 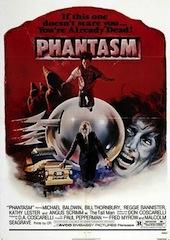 Phantasm (1979) has a few creepy shots and a scary villain, but it’s nowhere near as memorable as some other old horror classics. Every Halloween season the Bravo channel has a special called 100 Scariest Movie Moments, which first aired in 2004. It’s an excellent documentary miniseries that counts down all the horror classics, English and foreign, to number one. Phantasm is number twenty-five on the list and shows a scene of a tall man standing over a teenage boy in his bed. As the camera zooms back these two dwarves come out of the ground on the sides of his bed and attack him. EEH! Perhaps my biggest fear in life is to have somebody or something (dead or alive) attack me while I’m sleeping. After many years of thinking “Ok. Now is a good day to sit down and watch Phantasm because it’s a cult classic,” I finally got to watching it. It’s an absolutely harmless low-budget horrorfest that includes a tall man (who, and I’m not joking, is only referred to as The Tall Man in the movie), alien dwarves, a topless woman, a fast-moving silver sphere, and yellow goo.

I enjoyed the cheesiness of it all, but I forgot about Phantasm pretty quickly. The movie cost $300,000 to make and ended up earning nearly $12,000,000. I think if I’d seen it when it came out then I would have loved it. Sadly I’m living in the twenty-first century and have seen other, better horror movies. The Tall Man, played perfectly by Angus Scrimm, is a mortician/grave robber from outer space who transforms the bodies into zombie alien dwarves who wear black cloaks and look like wannabe Death Reapers. Mike (Michael Baldwin) gets suspicious after he sees The Tall Man carrying the coffin with his recently deceased older brother inside. He tells his other older brother, Jody (Bill Thornbury), about it and the two pair up with a friend, Reggie (Reggie Bannister) to stop the guy. Oh yeah, and Mike is living with Jody because their parents are dead too. Geez, can his family life get any more depressing?

This is a goofy plot with wooden performances that are easy to love, but not much is really explained. In one scene Mike manages to chop off the fingers of The Tall Man (that’s where the yellow goo comes from). He bravely picks up one of the fingers and brings it home so that his brother will believe him. Soon the finger ends up turning into a large bee-like insect that chases Mike and Jody around the house. Ok, so what’s the point of this? Is this what alien goo transforms into? Nothing is explained at all. There’s also a sexy blonde woman, whom Jody starts to see, that is actually a killer working for The Tall Man; yet her character isn’t explained at all. I’m only assuming she’s working for The Tall Man because in the opening scene we see her kill Mike and Jody’s brother. Whenever she’s onscreen she’s either topless or staring at the other characters.

This Tall Man certainly gives off a scary presence and just watching him run after people is bone-chilling enough. If you’re a horror fan then you’ll enjoy watching him as well as the cheesy sci-fi elements of the movie, but I just don’t think it’s quite worth it to check out Phantasm. Go watch Halloween, The Evil Dead, or other better-known horror flicks. Even the career of the writer/director, Don Coscarelli, didn’t prove successful. He directed three Phantasm sequels and a well-received but forgotten 2002 horror/comedy called Bubba-Ho-Tep where Bruce Campbell (best-known for The Evil Dead series) portrays Elvis Presley.