Posted at 09:52h in Movies, Reviews by FlixFling
0 Likes
Share 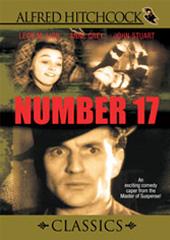 My admiration for Alfred Hitchcock grows each time I see one of his early films. Made in the 1930s in England, they all seem to have small budgets and very limited equipment lists.  And yet, because of his direction, they are still wonderful.  Take for instance, Number 17.

Number 17 is essentially about a group of crooks search for a stolen diamond necklace.  Of course, this task gets rather jumbled in the midst of false identities, kidnapping, and near-death experiences.  On one side, a detective, a drunk, and a young lady are caught in the wrong place at the wrong time (or so we think).  On the other, a band of criminals are looking for their cut and a route out of England.

The story is a bit convoluted and gets confusing sometimes, partly because characters repeatedly reveal their “true identity,” and partly because the actors look very similar.  But don’t let that trip you up.  Number 17 is suspenseful and surprisingly humorous.  The perpetually confounded Ben provides refreshing comic relief in the middle of tense and dangerous situations.  The contrast between him and his de facto brother in arms, the unnamed detective, makes his squirreliness all the funnier.

As I intimated before, the best part of Number 17 is Hitchcock’s artistic touch.  He uses simple techniques to create an extremely tense atmosphere. Number 17 and other films in his early collection truly prove that he was always the Master of Suspense.