Posted at 11:06h in Movies, Reviews by FlixFling
0 Likes
Share 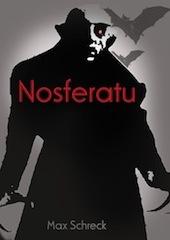 Nosferatu is the original cinematic representation of a vampire.  It is the tomb from which crawled Buffy, Angel, Twilight, and the Vampire Diaries, though it may be difficult to see the resemblance.  Nosferatu is the 1922 adaptation of Bram Stoker’s Dracula, which entangled the stories of Jonathan and Mina (here changed to Nina) Harker, Van Helsing, bug-eating minions, and the legendary vampire himself.

Upon hearing that Count Dracula, aka Nosferatu, wants to purchase a house, Harker rushes to Transylvania to close the deal, leaving his high-strung wife with family friends.  Not a care in the world, Harker rolls, like Meals on Wheels, into Dracula’s castle after ignoring warnings and foreboding looks from villagers.  Once Harker realizes that his host has been buffeting on him while he slept, Harker escapes.  Nosferatu, having just purchased a house across the street from the Harker’s, follows Jonathan home and proceeds to terrorize their quiet enclave.

For anyone not accustomed to silent movies, Nosferatu takes a bit of getting used to.  The over-exaggerated dramatics and awkward orchestral music are more disconcerting in this film than in more widely watched silent films like City Lights.  Nonetheless, Nosferatu is a classic and the origin of an icon.  The best thing about Nosferatu is that it gives you a chance to see an iconic image, not as clips, promos, or photos in The Vampire Bible (yep, I own that), but on film as it was meant to be seen.  If nothing else, this film is innovative and should be appreciated as such.