Posted at 12:50h in Movies, Reviews by FlixFling
0 Likes
Share 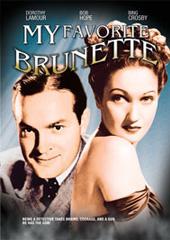 In the beginning of My Favorite Brunette, we find Bob Hope in an unlikely place – prison, awaiting execution on death row.  Immediately, my interest was piqued.  When reporters arrive to hear his story, Hope’s Ronnie Jackson tells us the whirlwind tale of how he wound up on the chopping block.  It’s filled with lust, deception, intrigue, and more than a few pitfalls and missteps.

My Favorite Brunette is a spoof of hard-boiled detective films in the ilk of The Big Sleep and its grandchild, Chinatown.  It is an experiment in what would happen if one of us mere mortals were dropped into the middle of The Maltese Falcon.  Of course, while you or I would probably be scrounging inelegantly for a way out, Bob Hope makes it out-of-depth hilarious.  He begins as a family photographer outside San Francisco’s Chinatown, when a beautiful and distressed woman mistakes him for his suave super-sleuth neighbor (cameo by Alan Ladd, a well-known sleuth himself).  Recognizing a chance to live his dream, Hope is all to too happy to continue letting her think he is a PI and the answer to all her problems.  Throughout the film, he delivers awkward one-liners and perpetually misses the mark, repeatedly winking at the drama and absurdity of noir-ish PI films.